A storm dumped several inches of snow across the Northeast overnight Sunday into Monday, closing schools in New York City and Boston and leaving a slushy mess for the morning commute.

Manhattan’s Central Park was hit with five inches of snow, its largest snowfall total of the winter so far. Boston’s Logan Airport received nearly 10 inches of snow, while some areas around Boston were hit with more than a foot, the National Weather Service said.
By midday Monday, snow had stopped falling as the storm moved off shore, clearing up visibility in the affected areas. 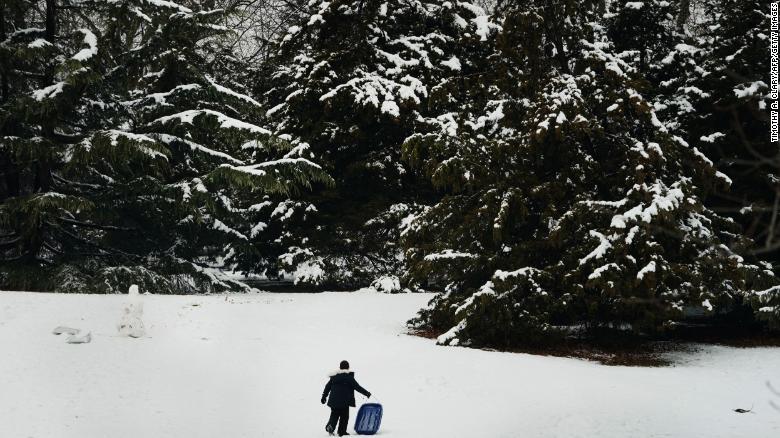 A boy sleds in Manhattan’s Central Park on Monday after a late-season snowstorm.
New York Gov. Andrew M. Cuomo announced he’ll be deploying state resources, including thousands of plow trucks, specialized law enforcement vehicles and utility workers, to areas expected to be hit with snow.
“We have learned from experience that it is better to be over-prepared in these situations — if you’re not prepared before the storm, it is too late,” he said in a statement.
New York City Mayor Bill de Blasio said the city is expecting the “biggest snow accumulation we’ve had all year.”
“This is going to be a serious storm,” he said Sunday. “People should be ready for really tough conditions in the morning.” 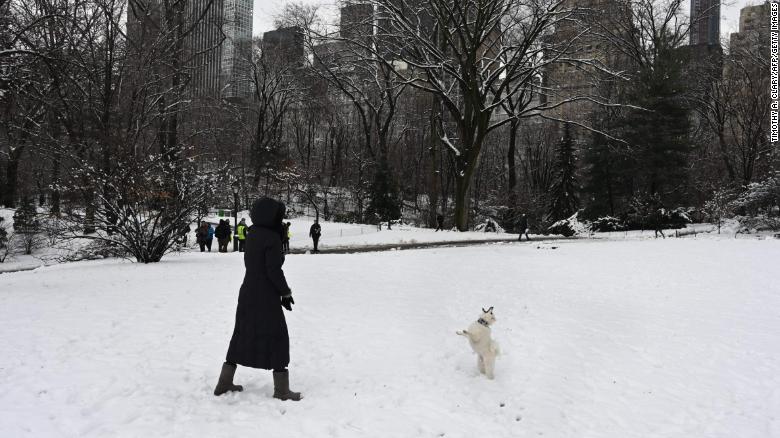 A woman plays with her dog in Central Park on Monday after 5 inches of snow fell.
He said all New York City public schools will be closed Monday and urged drivers to stay off the roads and take mass transit if they must go out.
Across the river, New Jersey also is expecting several inches of snow by Monday morning. New Jersey Gov. Phil Murphy declared a state of emergency, asking drivers to “stay off the roads so that we are able to deploy available resources to clean the snow.”
Public schools in Jersey City and Boston will also be closed on Monday, the schools districts said.
Boston’s City Hall is closed Monday “due to more than anticipated snow that came overnight, which has brought up to 14 (inches) of wet, heavy snow in parts of the city,” a press release from the Office of Boston Mayor Marty Walsh said.
The weather system that will blanket cities across the East Coast began developing Saturday, bringing snow to the Central Plains and putting millions of people under winter weather alerts from Colorado to Maine.
As the storm leaves the northern East Coast behind early Monday morning, the National Weather Service said it will be dropping snow at a rate of one inch per hour. Nearly 43 million people are under a winter weather warning, CNN meteorologist Robert Shackelford said.

The storm may well have departed from the Midwest but some severe weather conditions still linger. The main issue for most of the Midwest this week will be the cold, Shackelford said.
“There are up to 50 potential record cold highs for Monday,” he said.
In Colorado — parts of which saw nearly 4 inches of snow — a warning has been extended to multiple mountain ranges as the snowfall created multiple dangerous avalanche conditions.
Late Sunday, an avalanche closed I-70 eastbound between Copper Mountain and Frisco, Colorado, according to Amy Ford, a spokeswoman for the Colorado Department of Transportation.
Ford said it was the second avalanche on Sunday in the same general area. 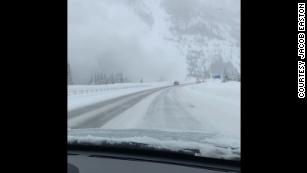 She said the interstate was shut down while crews cleaned up. While there were cars in and around the avalanche, Ford said she didn’t think anyone was injured. The highway has since reopened.
[“source=cnn”]
andasBostonCitycloseNewNortheastschoolsslamssnowstormYork

Silicon Valley Came to Kansas Schools. That Started a Rebellion.